skip to main | skip to sidebar

"Once your consciousness has been raised, it cannot be lowered"

My parenting journey, our home educating family and some other stuff here and there....

It's almost a given in attachment parenting that some or all of the parent's needs will be unmet. Be it sleep or lack of personal space, there's usually something parents would really like that they forfeit to care for small children, for a time at least.

For a long time now one of my greatest unmet needs has been ease. Granted, it seems a lot to expect ease in my life with the choices we made about moving to a building site and having a third child: small children and project houses are hardly renowned for being easy, stress free ventures! However, I really like to think that it is possible for us to have our needs met whatever the circumstances, even if it's not always, ummmm....easy :-)

If my situation precludes fundamental needs being met, perhaps I must reconsider whether meeting this need is truly a priority. Perhaps if I'm honest, those needs can wait a few years, or slide down/fall off my list altogether. Or maybe some (big) changes need to happen.

As much as I have wanted to believe I don't deserve ease at the moment, because of the circumstances of my life, I keep coming back to a place where I feel I must shift things, both practically and emotionally, to achieve a more peaceful inner state and a sense of ease of being.

Some ways I am trying to make life easier practically....
Emotionally, finding ease is much harder, but when i pare the situations I find most difficult to live with back, ease seems to constitute a few different things for me: acceptance, realism, clear boundaries, honesty, freedom. Funny how these little words embody so much internal struggle! It's been feeling like ease has been something to strive for, but I realise I have to find it here and now in each moment to really live with ease. Life is always imperfect, but I can always make the choice to live simply.
No comments:

I'm really feeling a shift in myself in my attempts to change my procrastination habits. It's taken me quite a few years to get around to this....  :-)

The logical and practical reasons for doing things little and often hadn't escaped me, but actually getting round to changing my procrastinating tendencies was more problematic. However, for a while now I've been managing to break things down into little steps in order to tackle bigger jobs. And it feels really really good to be getting somewhere, finally....

Regardless of the task, choosing short bursts of activity have really focused my energies and helped me reframe my perception of time. I can achieve more in 4 x 15 minute bursts throughout the week than I can when I wait to get a whole hour "spare" to dedicate to something. The sense of overwhelm is slowly decreasing as I work through my enormous to do list.... Doing little bits also means that I can keep up with my everyday tasks better than if I try to take too much time out from the daily drudge to tick things off my list.

I'm also realising, and I'll admit to being a bit slow picking this up too, that the only way I'm going to survive parenting in the way I choose to is to accept this! Just doing lots of little bits seemed so frustrating to me, so I'd struggle to begin. But actually, I'm doing more this way. Being productive feels good, and I'm managing to keep some of the promises I made to myself to care for myself better and to try and balance life as a busy Mama and homemaker.

How do you motivate yourself? Do you struggle to find time for you?

Forgive me if all this sounds very obvious. Perhaps everyone else is much better at this than I am. It's taking me such a long time to get to grips with living one bite at a time!

does it work?....I'm testing. I am quite excited about this development! Must check spellings or my blog will be littered with dreadful phone text typos....

Here's a lovely picture of Cosmo 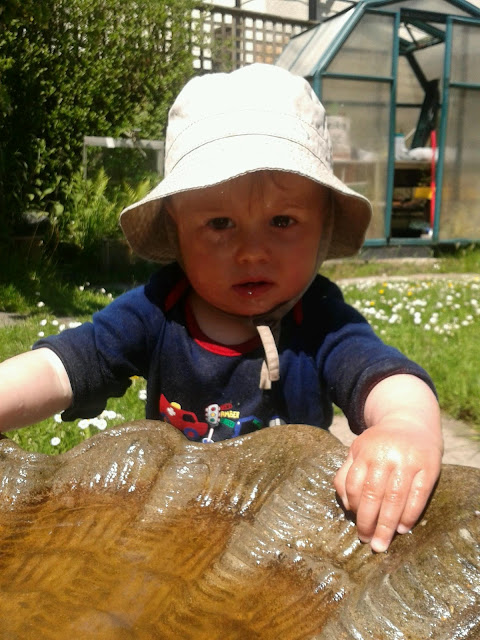 I've just discovered I can blog from my phone. Huzzar. I might actually stand a chance of posting some stuff up more than once a year.

I'm determined not to become totally addicted to my smartphone, and of late I've been very consciously turning it off, ignoring it and pretending it doesn't exist. But I can't deny how much I love having the internet at my fingertips or how easy it makes browsing eBay, Facebook and Pinterest. I want to harness this technology for the greatest good possible, since I'm making the choice not to reject it outright.

Writing is definitely for my greatest good. A sanity saver, but best done little and often. So hip hip hooray! for the Blogger app that is currently zapping through the ether to my phone....I hope it's good!
No comments:

Yet again it's been a long time since I posted here. A very very long time....

So much has happened that I hardly know where to start, or if I ought to. A large part of me has been wanting to write and yet I'm bothered by the thought that I won't get around to doing this very often these days. I'm slightly embarrassed by the gap between posts! I am as rubbish as ever at uploading photographs. Should I just accept I am overstretched and call it a day?

I've come full circle: life was moving away from all things birth/baby related as my sweet children grow older.  I should have had more time to write. But then, after pretty much deciding we were happy with 2 children we changed our minds! It doesn't seem to have taken very long for the most recent small man in our family, Cosmo, to make himself at home. I could be writing about EC again now as we dance the intuitive mother and baby dance together... but I'm not....I'm definitely struggling to find time where I have 2 hands free to type anything at all.

Let's see if I get around to some more posts any time soon before I make any decision on this. I've made enough tricky decisions lately.

I recently watched an amazing TED video of Steve Jobs. An incredible man.

I was really struck by what he says about using intuition, following your dreams and "joining up the dots". Essentially he was saying that if you trust your inner guidance and follow your heart, even if it seems like the "wrong" thing (to other people perhaps...) at the time, you will reap the rewards in the future. Only in the future will you be able to see that an action was entirely "right" and how that has contributed to your present. In Jobs' case, dropping out of college gave him the time and space to become fascinated with calligraphy, which subsequently influenced his whole approach to design and the typography that was used to develop the Mac, and every computer thereafter. He didn't know at the time how calligraphy would affect everything later on....but with hindsight he could join the dots, reinforcing his sense that he knew what he was doing all along.

I really need to work on the part of me that is full of regrets for not following my heart when I was younger. I think my inner guidance has always been pretty hot, but I've definitely failed when it comes to having the courage and strength to act by it. It would be interesting (for me) to try and think of some concrete examples of this, but I'm not going to bore you with this. Hehe.

It's difficult not to feel a sense of disappointment that I've wasted a lot of time over the years. I keep having these pangs of anger with myself that I am not accomplished in the ways I'd like to be because I didn't do what I really wanted to, and that (aside from Mothering) I haven't found my life's purpose. I was so afraid, bothered about what other people would think, the names I might be called, of "failure". It's so silly, what is failure anyway? I've failed more by not doing than I would have by doing. That's one thing that I see when I join my dots....

Since we moved I've been trying to slow right down and focus on my purpose. I have lots of interests and half developed hobbies, and in the past my energy has felt scattered, that's really bothered me. I've been consciously trying to find something that lights a real flame of passion and creativity in me, taking Wild Oat flower essence seems to be helping me to pin myself down a bit.

I've talked in the past about my love of swimming and yoga, and yet these things are more about finding  peace, space and vital sustenance than about the surges of passion, purpose and creativity I've been desiring.

I was very pragmatic: I wrote a massive list of all the things I wanted to do/learn and then worked out which were my priorities, what I could do without help and what I needed to join a class or group for. And then I started singing again, with a bunch of fantastic women who are very very funny, super creative and extremely talented. Joining a singing group is making me realise and appreciate my talents. It's really helping me to move past this sense of regret that I haven't been singing and playing music all along. I still really wish I was Laura Marling, but maybe there's still time.... and even if I'm not Laura Marling, at least I'll be living life with more depth, purpose and joy.
1 comment:

I've been wondering how on earth I will ever feel able to start blogging again after the passage of so much time. Moving has taken it's toll on our family in so many respects. Time to do anything much apart from eat, sleep and do what we need to do to keep going is more scarce than ever. Time for my own pursuits and creativity is proving one of the hardest things to claw back now the dust is settling.

In order that I can dive back in and start writing in the present tense, I feel the need for a brief catch up. To save everyone from my waffle I have been inspired to do this in the style of the facebook status update. I seem to have wasted many hours looking at facebook since I somewhat reluctantly reinstated my account, so it seems fitting to appropriate something that has stolen lots of my time for my own time and effort saving benefit!
So, here are the updates I could have posted from  March 2011 to now.
Sarah:
And there we are, up to date. ;-)
3 comments:

Me and the Kids 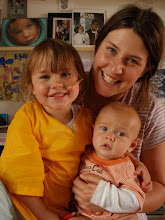